In the stone age of my high-school days, I had a job in a small printshop, where I learned to run a Heidelberg Wing letter-press, and about quality in printing and graphics, not just from the owner, but also from the companies we worked with, another printer with a big Heidelberg GTO, and the two typesetters we used, with their computerized photo-setters.

In prehistoric times I worked at Kuwait Petroleum (Denmark) A/S, and suddenly one morning the company was called Q8 (Denmark) A/S instead, and we had all received a small toy truck, a petrol carrier, and a kite, both with the new colorful logo. Soon after came a design manual which made Goudy Old Style the official and mandatory company font.

That started my life long love-affair with PostScript.

I mean: RPN syntax and high quality graphical output, what’s not to like?

In FreeBSD we used Beastie as our logo and mascot, but we had precious little raw material, basically a relatively low-res scan of the original 4.3 beastie which Walnut Creek CD-ROM had turned into CD-covers and T-shirts:

From time to time, people would use that in atrocious magnifications which made me and everybody else cringe.

But what else could the do?

They needed to produce a poster for this or that event…

Then one day I myself needed to make a poster for Open Source Days, and I simply couldn’t get myself to do it.

I do not even rate “awful” in free-hand drawing, I am worse than that, but something had to be done.

After agonizing about it for some days, and experimenting for another day, I sat down and redrew the beastie drawing in xfig(1), an incredibly rudimentary vector drawing program, from the original X11 distribution, mostly intended as an example program.

I used, and still use, the ctwm(1) window manager, and the trick I came up with, was opening the 4.3 beastie .gif in xv(1) in one virtual screen and xfig(1) in another virtual screen.

I could then, repeatedly, positioned the mouse cursor on the xv(1) window, hit ALT-Fx to switch to the xfig(1) virtual screen, and click the mouse to draw there.

That took an entire afternoon.

But the Xfig(1) drawings were vector drawings, which allowed me to make adjustments, fix bugs, translate coordinates and so on, by editing or postprocessing the .fig file with all the usual UNIX tools.

Another utility called fig2dev(1) could turn a .fig drawing into .eps - Encapsulated Postscript.

Encapsulated Postscript was for all intents and purposes the precursor for the SVG format, only much more general, turing complete and in RPN notation. Despite all that, it was a resounding success, because it made it possible to move vector or raster drawings, photos and illustrations between applications without any loss of quality.

The EPS Beastie was still not good enough, but it was still in vector format, and after some more fiddling with xfig(1) and a few manual tweaks to the final beastie.eps file, I was half-way to my non-cringeworthy poster: 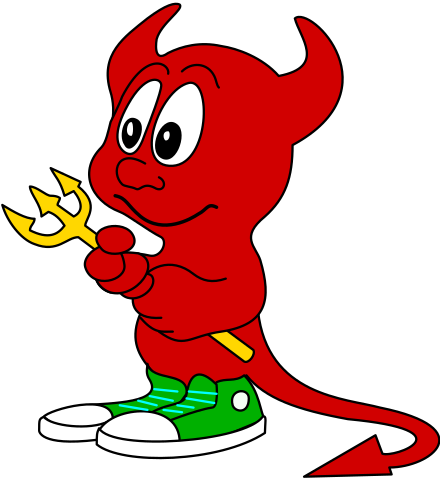 The other half of my problem was the font which had become our signature way of writing “FreeBSD” - again driven mainly by the Walnut Creek CD-ROM products.

Nobody knew what font it was.

I asked Jordan, but “the graphics guy” were not at WC any more.

On my own visits to WC, when I lived in the Bay Area, I had picked up various interesing CD’s, including the most expensive they had ever made: Font Garden, expensive because it came with a book containing samples of all the fonts: 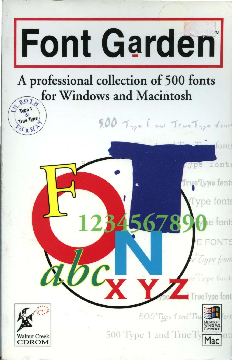 Knowing something about the mentality of the people who ran WC, I figured it was a good bet they had used a free font from Font Garden, and leafing through the book I found it on page 247: NRB Welsh Gillian Bold and on the CD I found it it was created by a Neil Beshoori from UK.

I asked him by email, and he kindly released a special version of the font for the FreeBSD project, appropriately named “FreeBSD Bold”.

Finally I could complete my poster: 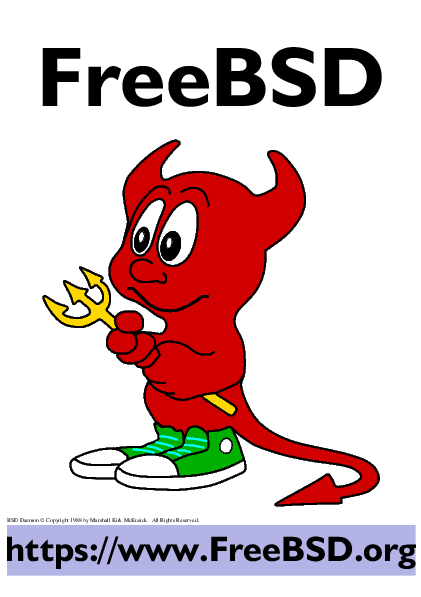 Having secured permission from both Kirk and Neil, I checked the files into src/share/examples/BSD_daemon where they still live to this day.

“VectorBeastie” has popped up a lot of places in the subsequent 21 years, and I’m always happy to see him.

Today he appeared in a Twitter thread by Tom Lyon, about becoming Sun employee #8 reminding me, that I ought to write his saga down.

May Beastie be with you…

GzipAout & The best laptop I ever had