I have laid my grubby hands on another HP5065 so I now have two, and while checking it out I realized that some klutz had been “fixing” the synthesizer with little regard for anything but the ability to shift this one as “working” on eBay.

Fortunately it’s nothing I cannot fix.

We characterize signals in all worts of ways, AVAR, MVAR, phase noise and so on, but none of these are particularly good at characterizing electronic metastability.

Metastability shouldn’t exist in the first place in any competently designed electronic circuit, so there isn’t much need, but in a maintenance situation it is nice to be able to detect it.

Here is one way: Connect the signal in question to your HP5370 on both START and STOP, switch into binary mode (“TB1”), collect measurements as fast as you can and plot a histogram of the values:

But that is nothing compared to the HP5065 Synthesizer:

I have included measurements from three HP generators for reference, and it is interesting to note that the two older ones clearly outperform the modern DDS based one.

But what the heck is going on with the HP5065 synthsizer output ?

The way the synthesizer works is actually pretty unorthodox: 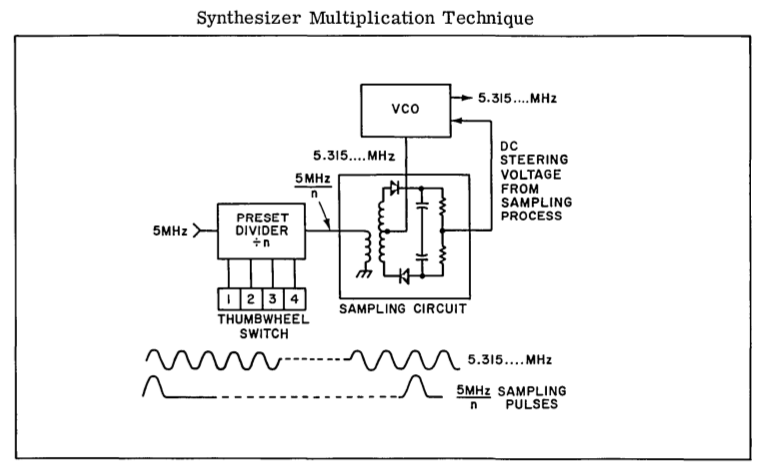 It is basically a N:M PLL where you set N on the thumbwheel and leave it to converge on a suitable M inside an particular narrow band out output frequences.

And the thumbwheel controlled divider is even more unorthodox: 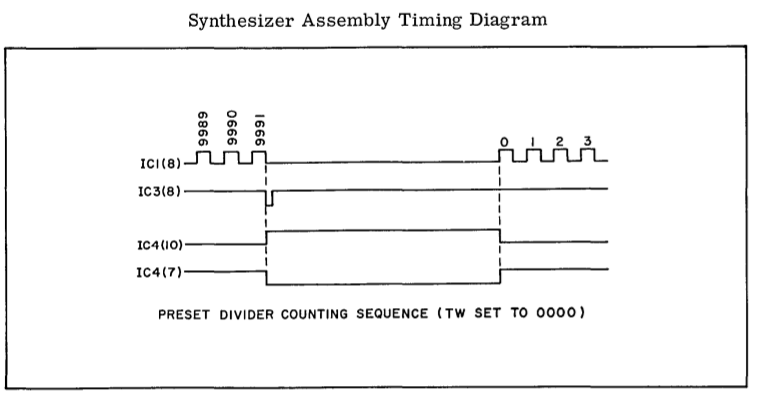 Part of the counting sequence is a one-shot, depending on a RC network for its timeconstant.

As long as the one-shot fires reliably with a duration between 9+ε and 10-ε periods, things work as expected, but if the one-shot drifts, it may no longer reliably cover exactly 9 periods of the clock, and things things get weird.

I suspect that is what happens on HP5065#2, and a plot of the raw period measurements seems to confirm this:

The one-shot chip looks like HP-unobtainium, and by far the easiest way to go would be to replace the entire divide-by-N circuit with a microcontroller.

But the rather noisy output of the synthesizer begs the question if there is improvement to be had by replacing all of it.

The obvious first experiment is use the HP3336 as synthesizer, (feeding its EXT REF input from the HP5065) to see if it there is any measurable impact on stability.