In 1999 I had become sort of a de facto spiritual leader of the FreeBSD project, and I took it on myself to send out email-missives to address what I felt were serious issues in the project.

One particular event on our mailing lists ticked me off to a degree that I have seldom been ticked off in my life, and it took me a couple of days to calm down enough to express myself coherently about it.

Thinking about my own reaction made me “go meta” and think about how the same pattern appeared again and again, and after a few more days I was able to distill my insight into an email to the FreeBSD crew.

That email had far bigger impact than I ever expected.

Initially the only effect was to introduce the “bikeshed” as a term of art for a yellow card in the FreeBSD vocabulary, and from there it slowly migrated elsewhere, probably carried along by FreeBSD committers.

For BSDCon’03 some of the crew needed a special pat on the back so I designed a T-shirt for them, carrying this motif: 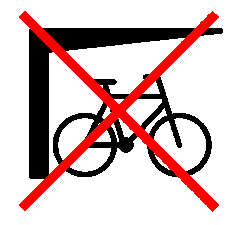 The actual T-shirts were made by a small embroidery shop just up the road, and only afterwards did I realize that I could have had the bikesheds in different color on each of the T-shirts for no extra cost, which would have made it so much better.

The T-shirts were a big hit, and to this day you can still buy it in CafePress and other web-shops.

The art of FOSS management¶

Then Ben & Brian from the Subversion project picked up the bikeshed-meme, and brought it into their excellent talk “How Open Source Projects Survive Poisonous People” .

They also created the bikeshed.org website with my email, and suddenly it seemed that the bikeshed meme infected all of known computing in no time.

Ben & Brians talk mark a subtle but important watershed in FOSS history: It is the first time somebody has tried actually to suggest tangible strategies for the unique management problems in FOSS projects.

Prior to their talk, about as far as we had gotten was the “herding cats” metaphor, with its implicit resignation that nothing could be done about it.

Ben and Brian gave that talk a lot, including at BSDcan2007 where this picture was taken, showing Warner med me in the original BSDcon’03 anti-bikeshed T-shirts, flanked by Ben and Brian: 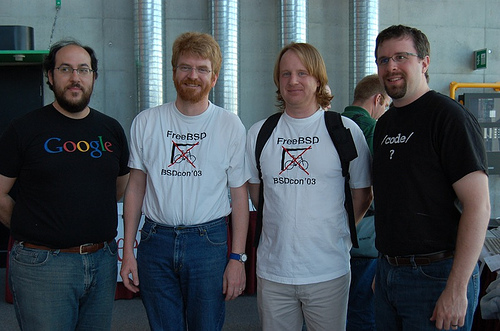 The interesting thing was, after their talk, I talked to some of my old core.0 colleagues and the uniform reponse was “yeah, we knew that” because those were the exact same issues we had faced in the previous decade.

But none of us ever thought about trying to sum up and communicate our “management experience” to other projects.

Ben & Brian dragged the human aspect of FOSS project management out of the closet and made it respectable.

There is one bit of wisdom I think Ben & Brian missed: The “Goodbye & Good Luck” force multiplier:

Most of the time that is a good idea, but occasionally, it makes a lot more sense to part ways and be happy in two competing projects, than to stay together and fight instead of hack.

My best precedent for this proposition is the OpenBSD project: Theo would have ripped NetBSD apart if they had let him stay, my impression is that he almost did before they tipped him out. But after the split OpenBSD went on to deliver some of the most important security code in all of FOSS, for instance OpenSSH.

I had hoped for similar effect when FreeBSD finally tossed Matt Dillion out, but so far DragonflyBSD has been a bit of disappointment in that respect.

A twist of the tail¶

Recently Google introduced a new feature where they show “People also search for” if you search for some persons.

In my case the result is this utterly awesome suggestion for a dinner-party: 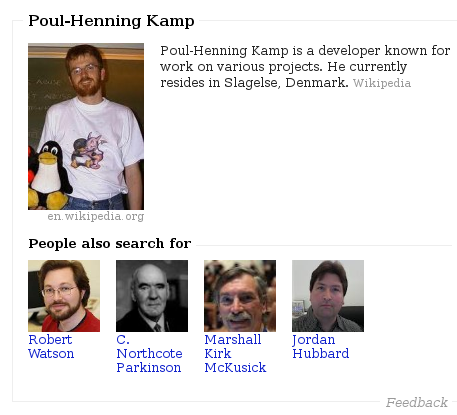 In all its glory: