When astronomers have built a new telescope or a new instrument for a telescope, dragged it up to the top of a remote mountain and plugged it on for the first time, they celebrate “First Light”.

I guess I should celebrate “First Time” today, since I have steered an actual computers kernel clock using my new program for the first time: 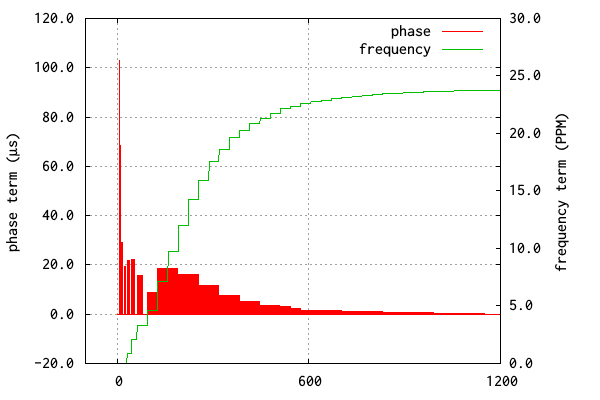 That doesn’t look half bad.

And just to make sure life didn’t become too boring too fast, I whacked the FreeBSD kernels timekeeper 0.7PPM using a sysctl normal people should never touch:

Now its time to start packing things up and apply some spit and polish, before letting the world at large play with it.

The first bit of polish was to write a “configure” script which spits out a portable or BSD style Makefile.

The portable Makefile works fine on BSD too, but I just have this feeling that this program might end up in the FreeBSD distribution…

In difference from most configure scripts, this one takes only 0.008 seconds.

It’s been said that there are only two hard problems in CS:

Naming a FOSS project is very much a problem of name-space management, because you want the name to be machine usable, for instance in a ps(1) listing, but you also want a good DNS name, and to not collide with any other projects etc. etc.

I think I have found a good name, but I won’t tell you just yet, I might change my mind still…